4 Reasons Why The Nordic Super Cloud Is Gaining Momentum

In the world of nuclear physics, the term critical mass is used to describe the smallest mass of material that can sustain a nuclear chain reaction. The phrase has been borrowed for business use to mean reaching self-sustaining viability.

I would argue that the influx of data center investment into the Nordic region has reached critical mass, and a so-called Nordic Super Cloud has formed.

It is no secret that data storage and compute are growing rapidly, not to say exponentially.

IDC predicts that the collective sum of the world’s data will grow from 33 zettabytes (ZB) this year to a 175 ZB by 2025.1 A zettabyte is a trillion gigabytes and this IDC forecast represents 61% growth compounding annually.This growth has inevitably given rise to the growth of ultra-large data centers to store and refine this “digital oil”. 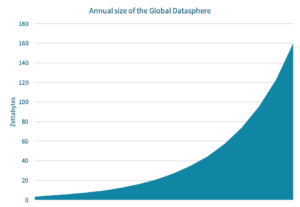 A second driver of large data center growth is the accelerating, not to say permanent, move towards cloud-based technologies. Both companies and consumers are moving away from self-managed IT infrastructure. MS Exchange Online, not running your own mail server. Netflix, not owning your own Blu-ray collection.

According to IDC, the market, just for public cloud services in Western Europe, is around $43bn today, and forecast to more than double to around $100bn by 2023.3

Amazon, Microsoft and Google are the primary public clouds in the West.

And according to RightScale, 84% of Enterprise and public sector organisations are pursuing a multi-cloud strategy and are outsourcing large swathes of their IT capability, leaving them freer to focus on core customer facing applications.4

10% of Enterprise have already closed their own data centers and by 2025 that will be 80%, according to Gartner.5

The cloud is clearly not just someone else’s computer, but it is very much someone else’s data center. The reasons for moving to the cloud are well documented – perceived cost, scale, flexibility and ease-of-use. A key component of the cost savings possible are enabled by hyperscale data centers built and automated at a size beyond the capability of all but the very largest global organisations.

Having observed the exponential growth of data and the inexorable move to cloud technologies, what are some of the consequential trends also in evidence?

Many Western European electrical utility grids are operating at maximum capacity driven by macro-influences such as the shift to renewable generation sources and industrial electrification. 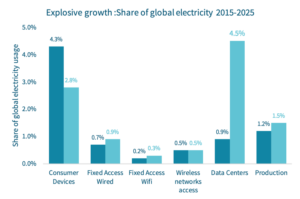 And data centers are a large and growing percentage of global electricity use, yet few people can accurately describe what a data center is!

These various scenarios represent compound annual growth rates between 19% and 33%. The airline or automotive industries growing at those sorts of rates is almost unimaginable.

For the power-hungry data center industry building on a 15-20 year asset lifecycle, this inevitably means their traditional locations in city centers are, or will soon be, running out of power and space.

For example, “London” is now defined much more broadly to include any location within 50km of the city centre. For the first time, zoned land prices with available power are attracting prices in excess of retail home development land.

And the national grid operator in Ireland, Eirgrid, is forecasting as much as 31% of all the electrical power in the entire country will be required for data centers by 2027, given known investment plans and growth rates.8

When relatively impartial and conservative public bodies such as grid operators and municipal authorities are raising concerns about data center electricity consumption, pricing signals, possibly in the form of carbon taxes, and planning moratoriums are sure to follow.

Another trend we can observe is that increasing attention is being given to CO2 emissions. And not only by governments and the EU towards headline-grabbing sources such as fossil fuels used in power generation, in automotive and in airline transportation. But also from a corporate responsibility perspective to include reporting emissions created by business operations, such as data centers.

Consumers are increasingly informed and proactive. And governments and corporations are sensitive to pressure from sources such as The Shift Project and Greenpeace. Their Clicking Clean regular report on the environmental credentials of large data center users highlights transparency and accomplishments in an easy to digest format.

As the “data tsunami” continues, the environmental impact of traditional data center solutions is becoming impossible to ignore. The data center industry already represents a larger carbon footprint than the airline industry (2%) and growth forecasts making a range from 7.5% to 10% of global carbon footprint by 2030 likely.

That’s why the Nordic Super Cloud was inevitable

Recently, a new fleet of hyperscale data centers has arisen in the Nordics to address these needs of scale and emissions. Whilst Western Europe data center builds have historically been dominated by the Frankfurt-London-Amsterdam-Paris (FLAP) quartet, the centre of gravity is moving North.

Nordic hyperscale growth has created a new cloud of clouds unmatched in Europe in size and diversity.

The Nordic Super Cloud is accelerating as the major cloud providers (AWS/Microsoft/Google) and consumer ‘clouds’ such as Apple and Facebook continue to invest in hyperscale facilities on a scale never seen before in Europe.

It is a major inward investment success story for the region and an environmental win for all of us. And this is only the beginning. 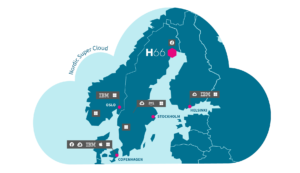 A brief consideration of the prevailing circumstances in the Nordics goes a long way to explain why hyperscale data centers in this region are growing at ~30%+ per annum against general EU market growth of 15%.  And it begins with electricity. 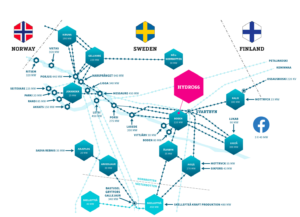 Sweden is recognised as the most connected country in Europe and Top 3 in the world.11 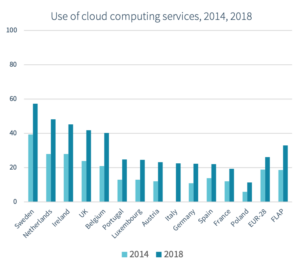 These conditions have been apparent to hyperscalers such as Google and Facebook since around 2010 and with the arrival of Amazon and Microsoft to the Nordics in 2019, critical mass has been established.

A final incentive to large US-based actors has been the implementation of the CLOUD Act, GDPR and similar privacy-focused legislation. Significant data sovereignty questions exist over US vendors control of data in EU territories. Their initial response has been to expand their data center footprint in the EU. And the Nordics has been the natural choice for scale buildout with tactical colocation data center infill in more expensive jurisdictions.

“The Clarifying Lawful Overseas Use of Data Act (CLOUD Act) allows US federal law enforcement agencies to seek a warrant requiring US service providers to provide stored data on any server within its possession, custody or control regardless of whether such information is located within or outside of the US.”

It remains to be seen exactly how Enterprise will react to the implications of the Cloud Act once these are fully understood. Will the compelling advantages of US-based public cloud solutions outweigh the privacy and sovereignty concerns of EU customers?

Google: $2.9b in 3 data centers in Finland and Denmark. Land purchase in Sweden

What’s next for the Nordic Super Cloud

As Enterprise accelerates their multi cloud journey, direct and fast connectivity to the large public clouds means implementing private and hybrid cloud elements in the region best suited for overall architecture and business needs. The European center of gravity for public cloud compute is undeniably shifting North from the established FLAP markets to the Nordic Super Cloud. And Enterprise will follow.

There is already a fast-growing ecosystem of colocation and cloud hosting providers in the Nordics already taking this high growth market as it develops. With significant CO2 and cost advantages baked in to their proposition, and adopting a competitive market stance today, the medium term for forward-thinking Nordic cloud service providers and their clients is assured.

A future blog will address the value proposition of Nordic cloud hosting providers in more detail.

Public Cloud: Application runs on shared cloud infrastructure in a data center owned and operated by a public cloud provider

Multi Cloud: Applications run on a mix of private and public cloud infrastructures without data interchange between clouds

Colocation: Applications run on hardware owned and managed by the Enterprise client in a 3rd party data center managed by a service provider

Like what you read? Show your appreciation through likes and shares!

Climate change is a tricky concept for humans. While we can see our weather on…
Read More

Posted on December 7, 2017 by Sara Grundström

But it’s not. Northern Sweden has an average annual temperature of 1°C. However, it can…
Read More